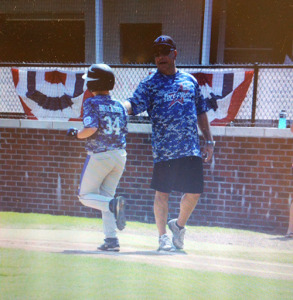 Beating Bayshore (Tampa) 12-7 in the championship game on Sunday at Fleischmann Park in Fort Myers, Fort Pierce completed an undefeated (4-0) run in the eight-team Florida state tournament. It also marked the 14th straight victory by the Fort Pierce 9-10 team in all star play this summer.

“What got us through the state tournament was our pitching staff,” Fort Pierce 9-10 All Star manager Tommy Gately said. “Plus, our fan base was outstanding. We must have had over 100 fans over here (Fort Myers).

“This is the first state tournament title for a Fort Pierce Little League team in 52 years.”

Steel Gately went 4 2/3 innings to earn the pitching win in the championship game, and Omarion Davis’ three-run home run in the first inning got Fort Pierce off to a flying start.

At the state tournament, Fort Pierce defeated Southwest Fort Myers (5-2) on Friday, and Plant City (8-5) and Oviedo (7-0) on Saturday.

Fort Pierce will now advance to the Tournament of State Champions in Greenville, N.C., July 26-30 along with winners from Alabama, Georgia, North Carolina, South Carolina, Tennessee, Virginia and West Virginia.

I have personally confronted and defeated government illegalities. I will protect your rights as if they were my own!"

Thank You!
Your message has been sent successfully.